Even though it has been nearly a year and a half since the outbreak of the COVID-19 pandemic, emerging markets and developing nations are still struggling to recover. The pandemic has disturbed lives in all countries and communities and lowered global economic growth in 2020 to about -3.5 percent on an annualized basis. The pandemic hasn’t hit everyone equally hard. Specific sectors like tourism have been struck worse than others, while some industries like eCommerce and telemedicine have experienced immense growth.

Technology is one of the sectors that has seen tremendous growth over the past months. With working from home becoming a norm for millions of workers and digitalization taking over, companies like Amazon and Netflix thrive.

Apple’s revenues nearly quadrupled to $21.7 billion in the three months ending on June 30 as customers bought more expensive 5G iPhones. At the same time, Microsoft made $16.5 billion in profit, up 47% year-over-year on the back of increased demand for cloud services and gaming. 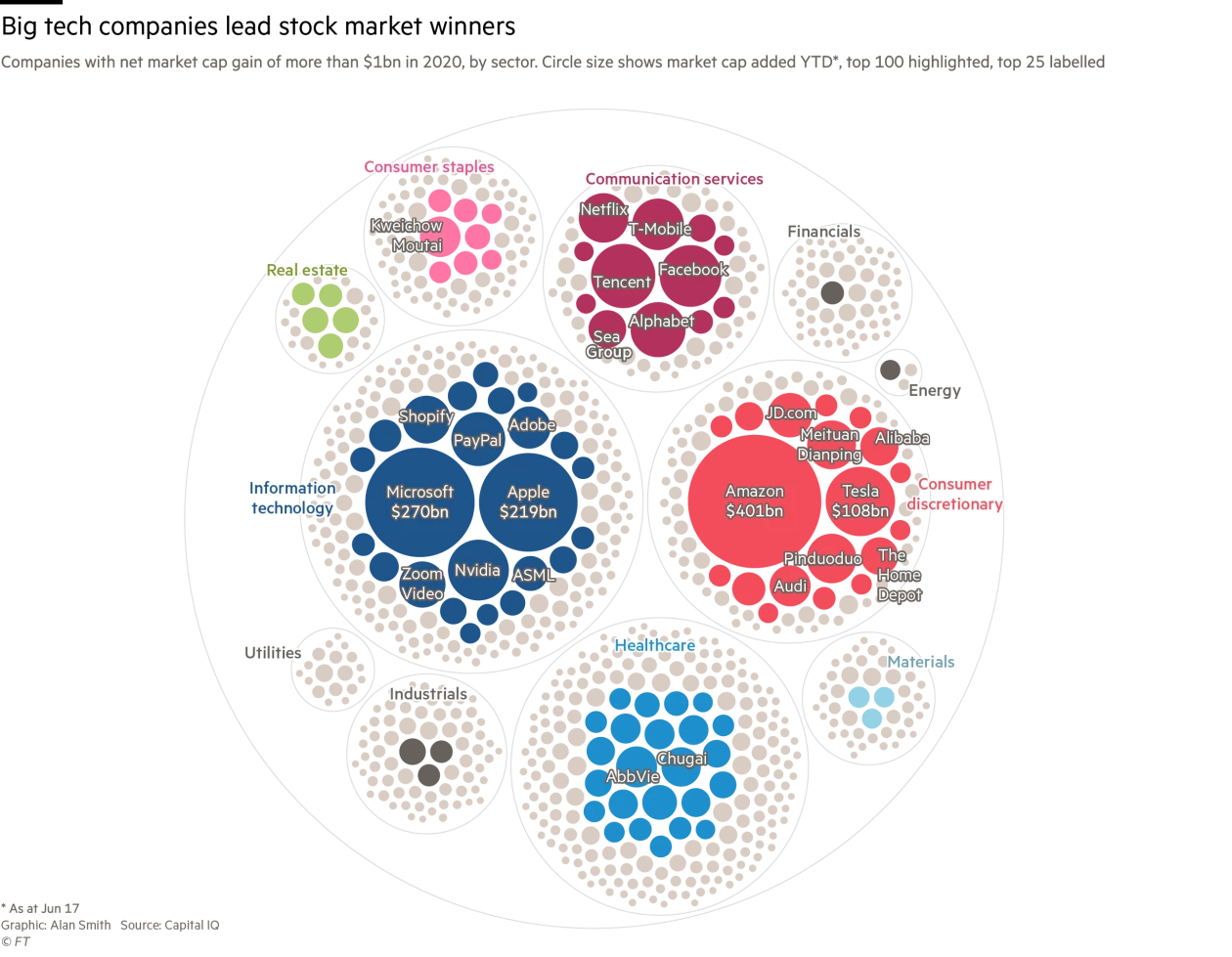 The Financial Times is one of the world’s leading and most trustworthy media brands. FT recently published a list of the top 100 companies prospering in the pandemic. We looked over what their choices are for brand and domain names.

Netflix is one of the most popular video-on-demand platforms that allow customers to view TV episodes and movies online. The company added twice as many subscribers as it has forecast In the first three months of 2020 and has made 6.15 billion for the second quarter of the same year. As of October 2021, Netflix has a market cap of $267.04 Billion. Here is an excellent article about what entrepreneurs can learn from Netflix’s rival rough start. Netflix is operating on the exact brand match domain name Netflix.com.

PayPal is one of the most recognized online payment solutions providers worldwide. As part of the US Small Business Administration’s Paycheck Protection Program during the pandemic, PayPal handled the transfer of more than $1 billion in federal loans. Today, PayPal has a market cap of just over $300 billion. PayPal was founded back in 1998 under Confinity (confinity.com) but later changed its business model and established an electronic payment system called PayPal. Currently, PayPal is operating on the exact brand match domain name PayPal.com.

Apple was founded by Steve Jobs, Steve Wozniak, and Ronald Wayne in April 1976. The company is one of the few big brands that has always been aware of consumers’ needs offering solutions as if they knew what people need before they even voice it. They craft their selling strategy on the basis that customers “need” their products for a better, more quality, simpler life and a sense of being part of a community. The company’s name was the idea of Steve Jobs, inspired by his visit to an apple farm while on a fruitarian diet. The company owns over 25,000 domains. Apple.com was secured on February 19th, 1987, as a top-level domain. Like other big brands, they also registered names of their products, names with an added word, dashes, typos, and many country extensions for their country-specific operations. As of October 2021, Apple has a market cap of $2.300 Trillion.

Amazon is an American multinational technology company based in Seattle founded by Jeff Bezos in Bellevue, Washington, on July 5th, 1994. Amazon became the go-to destination for everyone who needed to stock up on essential household items during the pandemic. The company’s market cap reached an astonishing $401.1 billion. Like Apple, Amazon also wanted to have the name on top of the alphabet, so another name choice was Aard. Bezos got Amazon, also on top of the alphabet, indicating that the business will be huge one day, just like the Amazon river, according to Mashable. The founder registered the domain name Amazon.com in November 1994. Now, Amazon Technologies Inc. has over 152,000 domains, including top-level domains, different extensions, added words, product names, marketing campaigns, and more.

Tesla is the pioneer and the world’s leader in electric car manufacturing. Demand for Tesla vehicles remained strong during the pandemic, and the company’s annual sales rose 36% at the beginning of 2021. Currently, Tesla has a market cap of $781.53 billion. Tesla is operating on the exact brand match tesla.com. Tesla initially launched on the domain name TeslaMotors.com back in 2003. It took years for Elon Musk to upgrade their brand to simply Tesla.com. In 2017, Elon tweeted: “Buying Tesla.com took over a decade, $11M and an amazing amount of effort. Didn’t like TeslaMotors.com even when we were only making cars.”

Shopify is a leading e-commerce platform founded in 2014 by Daniel Weinand, Scott Lake, and Tobias Lütke. The company processed $61 billion in merchandise worldwide in 2020, surpassing eBay and becoming the second-largest e-commerce group after Amazon in terms of market share in the United States. As of October 2021, Shopify has a market cap of $162.95 Billion. The company is operating on the exact brand match domain name Shopify.com.

Seventy-nine are operating on the exact brand match domain names.

When it comes to naming and brand strategy, most well-known brands operate on exact brand match .com domains. Below we’ll share some articles on the topic that will help you better understand why exact-match .com domains are one of the most valuable ones and considered a key to successful branding.

Only five companies out of one hundred have decided to use a dash in their domain name.

Next article
100ms raises $4.5 million funding in a Seed round